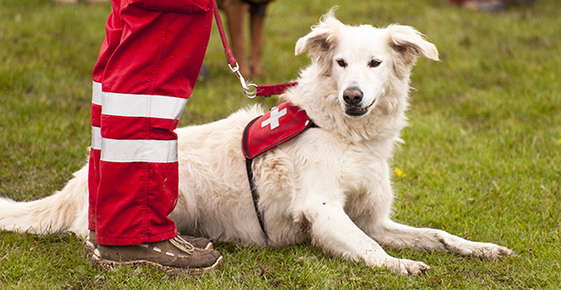 Among the many heroes in the days and weeks following September 11 were search and rescue dogs. These dogs and their handlers were brought in from all over the country to help at the New York and Washington, D.C. disaster sites. Many people are not aware that the handlers of these dogs are not always law enforcement employees, but volunteers using their own dogs. These volunteers incur all costs including mileage, equipment, plane tickets and dog expenses. These volunteers must take time off from work, often drive thousands of miles a year, and spend 50 to100 hours per month in training and searches.

Michael Hingson was on the 78th floor of the World Trade Center on September 11, 2001. His yellow Labrador guide dog "Roselle" was sleeping peacefully under his desk when the first plane hit the tower just fifteen floors above. Roselle led him through the disheveled office and to the stairwell to begin the long descent. Although they didn't feel anything, Michael estimated that the second plane had struck the other tower when they were somewhere around the 50th floor. "By the time we reached the bottom, it had become very hard to breathe," he said. "We were both very hot and tired. Roselle was panting and wanted to drink the water that was pooled on the floor."

They continued walking away from the building. They were about two blocks away when Tower 2 began to collapse. "it sounded like a metal and concrete waterfall," he said. "We started running for the subway." Roselle remained focused on her work and Michael kept his commands simple. When they emerged and were making their way from the scene, Tower I toppled, showering them with ash and debris. Roselle guided him to the home of a friend in mid?Manhattan where they stayed until finally they returned home to Michael's worried wife at 7 p.m. For more information on guide dogs, see www.guidedogs.com or call 1-800-295-4050.

Find us on the map