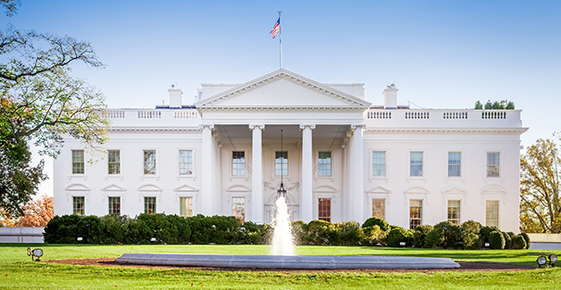 A surprising issue that has arisen in the American political arena is not foreign policy, but rather which breed of dog the Obama's chose to join their family in the White House. Barack Obama has announced that his family narrowed their breed choices to a Labradoodle, a mix between a Labrador retriever and a Poodle, and a Portuguese water dog. Both breeds are large, with curly hair and a mild amount of shedding.

There has been a long history of pets in the White House. Most Presidential pooches have been pure-breed dogs, including "Buddy" Clinton, a chocolate Labrador retriever and "Barney" and "Miss Beazley" Bush, both Scottish terriers. Bush Sr. had a Springer Spaniel named "Millie" that gave birth to puppies while at the White House. Ford's Golden Retriever "Liberty" also had a litter of puppies. Reagan owned a Cavalier King Charles Spaniel named "Rex" and a Bouvier des Flandres named "Lucky". James Garfield named his dog "Veto".

There have been some mix-breed dogs in the White House though: Abraham Lincoln's dog "Fido" and Lyndon B. Johnson's dog "Yuki" were both strays that found a home in the most prominent house in the world. Cats have also lived at the White House, most notably "Socks" Clinton. Eleven presidents have brought their cats to the White House, including Lincoln, McKinley, Theodore Roosevelt, Kennedy, Ford, Carter, Clinton, and George W. Bush. Although the standard White House pets are dogs and cats, a few presidents have enjoyed the company of more rare animals. John Quincy Adams owned an alligator and silkworms. Martin Van Buren briefly owned two tiger cubs. Calvin Coolidge had pet raccoons and a pygmy hippopotamus named Billy, among many other exotic pets. James Buchanan had a Newfoundland named "Lara" and owned a herd of elephants, which were a gift from the King of Siam, and two bald eagles. John F. Kennedy had a collection of animals joining him at the White House, including dogs, cats, birds, rabbits, hamsters, ponies, and horses.

Teddy Roosevelt had the most elaborate menagerie at the White House, including a bear named Jonathan Edwards, a badger named Josiah, and a blue macaw named Eli. He also had a lion, a hyena, a wildcat, a coyote, bears, a zebra, and various dogs, cats, snakes, hamsters, and guinea pigs. Animals at the White House certainly provides opportunities for some embarrassing occurrences. Teddy Roosevelt's Bull Terrier named "Pete" chewed a hole in the French ambassador's pants at a White House reception. "Yuki", Lyndon B. Johnson's mix-breed dog would howl during Oval Office meetings. Jimmy Carter's dog "Grits" ruined a White House photo op for Heartworm Awareness Week by becoming aggressive, ripping off her muzzle, and growling while a technician tried to draw blood for a heartworm test. Obama and his family have a big choice to make. Animals living with their family at the White House are an American tradition, and whichever dog the Obama's choose, one thing is for sure, it will be one lucky dog.

Find us on the map